Get fresh music recommendations delivered to your inbox every Friday.

by Chronixx Feat. Sampa The Great 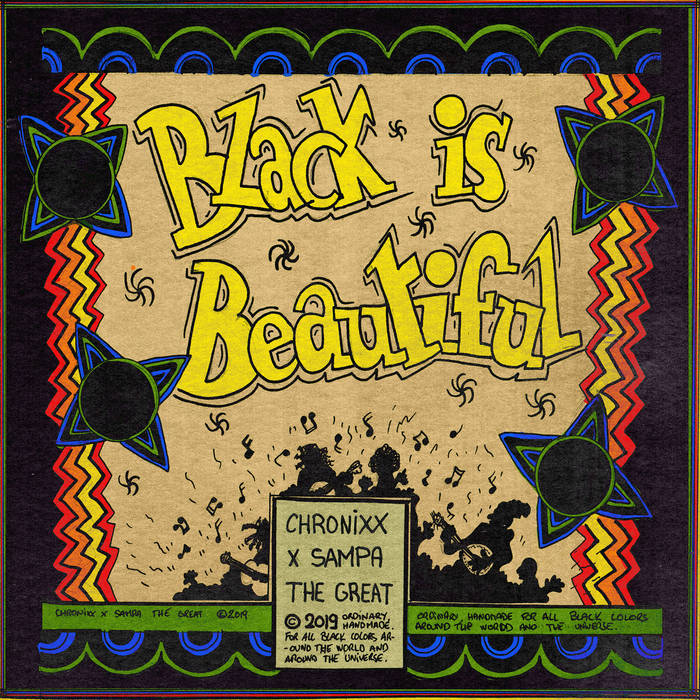 To end 2019, Jamaica’s Chronixx and Zambia’s Sampa The Great gift us with a remix of ‘Black Is Beautiful’. The track is taken from Chronixx’s Grammy-nominated debut album ‘Chronology’.

CHRONIXX
2012 saw the beginnings of Chronixx as a global artist after collaborating with Major Lazer on a mixtape, ‘Start a Fyah’. This spring-boarded him onto the global stage, with praise from tastemakers worldwide. His 2014 project, ‘Dread & Terrible’, immediately topped the Billboard (US) and iTunes (UK and Japan) Reggae charts and solidified him as a credible artist.

He’s since gone on to collaborate with the likes of: Anderson Paak, Ed Sheeran, Joey Badass, Koffee, Protoje and Little Simz. With a loyal fanbase across the world, Chronixx is now performing at sold out shows in major cities to an average of 5k-10k people – including London, Nairobi, Tokyo, Toronto and New York.

SAMPA THE GREAT
The rise of Sampa the Great has been spectacular to watch. Having previously released two mixtapes in ‘The Great Mixtape’ (2015) and ‘Birds And The BEE9’ (2017), the Zambian-born, Botswana-raised and now Melbourne based artist shared her debut album ‘The Return’, in 2019.

Released on Ninja Tune, ‘The Return’, it’s debut single ‘Final Form’ and the live show have seen Sampa The Great awarded many accolades, including an ARIA for Best Hip Hop Release, two Triple J Awards for Video of The Year and Double J Artist of The Year, as well as Hip Hop Act of The Year at both the Music Victoria Awards and National Live Music Award.

Alongside her industry praise, ‘The Return’ found radio support with international heavyweights like Zane Lowe, Ebro Darden (Beats 1) and Annie Mac (BBC Radio 1). While receiving love from the likes of The Guardian, NPR, Pitchfork, The FADER, Billboard, OkayAfrica and countless others, Sampa also made her European TV debut, opening series 54 of Later With Jools Holland, performing her standout singles ‘OMG’, ‘Freedom’ and ‘Final Form’.

VERSE 2
Black conscious
Understand the plight of my people
Now we looking way past equal
Another generation
March on the steps to feel
Legal
Just so they can kill another hero
Sound so feeble
To fight for the rights that you know
The land that you own
For the rights that’s your own
Just to push back to the life that you know
Right back fighting for the rights of us all
Me and My people
Came from the land of the blacks
Kingdoms and nations in fact
You studied all black
Your knowledge of
Science and spirit and
Chemistry numbers
And math
We manage all that
The knowledge of aerodynamics
And pyramids building all that
A matter a fact
Invention u see
Trust me
They that they all
Forget to mention their black.
What credit is that
You cover up my greatness on purpose
My future path vaguely uncertain
My destiny truly still hurting
Melanin deep and I’m still out searching
Royalty royalty
Help me find self
Africa Africa
Help me find wealth
Zion is
Zion is
Asking for help in the day of my judgement story I'll tell

Preacher is preaching, good God, things that he preaches
I wonder who taught him to preach
Teacher is teaching, where did he get his degree?
Now it is no mystery, who taught us black history
Ease up